For day 3 of linear system word problems, we tackled distance, rate, time questions. We talked about the relationship between the three and a students shared the "triangle" method (which I have issues with only because I have seen many students mess it up). Still, I like that they want to share ideas and feel comfortable doing so.

The first question was not too challenging, but reinforced that organizing the information in a table can be helpful. 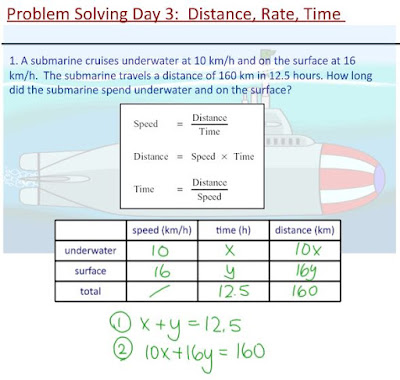 The second question is the type that they generally dislike the most. However, I read Cheesemonkey's very timely post this morning which gave me a new approach for this type of question. I really liked the idea of "helping" or "hurting" in terms of wind/current/etc. It just makes so much sense. 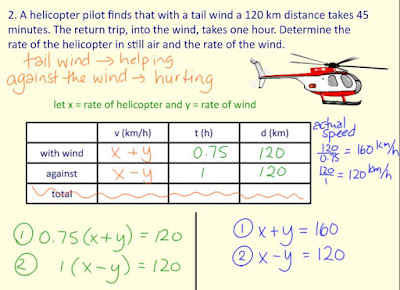 For the third question I had two students volunteer to be planes. 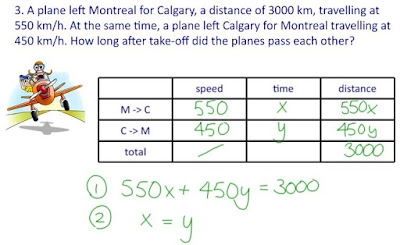 The door was Montreal and my desk was Calgary. One needed to go faster than the other and they stopped when they met. They even put their arms out to "be" planes and made fun noises! I asked a lot of questions - who went faster? who went further? who took more time? how far did they travel? Then they had to try to fill in the table. They got the speeds in and the total distance was not too bad, but then many were stuck. They talked in their groups for a bit before someone suggested putting variables in for the distances and calculating the times. This created fractions, which they don't particularly like, so we looked at a different approach - using the variables to represent time. They preferred this and came up with the first equation easily. The second equation required me asking "Who took longer?" again for it to click into place.

We didn't actually solve any of these questions as I know they can all do that. They will do two full questions like these for homework, so they are still getting the practice in.

We spent the rest of the period doing a little self-reflection. Well, they did. I had them enter their results from quizzes and tests on to their (paper) evidence record. This picture is not the best but the columns are the curriculum expectations and each row is for an evaluation. So test 1 hit 5 expectations, test 2 hit 6 of them. This (hopefully) gives them a better picture of how they are doing and specifically where they need to improve.

I enter all of this into a locally-developed program. Here is how one evidence record looks so far:

They also started filling in this self-reflection sheet. I made a column for each strand and a general column for things like the way they communicate their solutions, common errors, and so on. They have a row for each test so I hope this will help them focus on the areas that need the most work.