Boat on the River

We were about to start right-angle trig and I didn't want to just tell them the ratios without any reason for all of this.  Naturally, I went over to Andrew Stadel's 3-Act Catalog and came upon Boat on the River.  It was perfect! 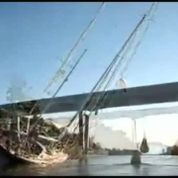 Here is the video for Act I. Go on, watch it.  It only takes 12 seconds.  So cool!  There were lots of questions flying around the room, then we got down to one:

We talked about the word "trigonometry" and how trig is used (Canadarm2 on ISS) and then looked at the ratio of sides of similar triangles (they each created their own triangle, similar to mine). 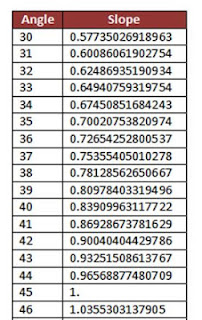 We talked about how one of the ratios represents the slope and how it changes as you change the angle but that it does not change if you scale up/down the side lengths.

I made a trig table for tangent, but called the columns "angle" and "slope" so they could find the angle that corresponds to any slope.  Then I told them that the slope ratio has another name: tangent.  We looked at some examples from the table and talked about that magical 45 degree angle.

After going over sine and cosine and working through a number of examples it was time for act II.  They quickly came up with what we needed to know: 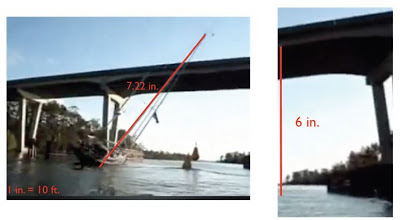 This leads nicely to another good conversation about similar triangles.

They worked out the angle proudly using their new knowledge...

And then we got to see if the captain had done the math before attempting to go under the bridge - Act III.  The video is here (54 seconds - with just the right music too).

This gave what we needed to do purpose.  It engaged them and they HAD to see whether the boat made it.  Another huge thank you to Mr. Stadel - you rock!

Maximizing Area of a Rectangle

Catching Up - Part I

You know how it is.  We are approaching the end of the year and there is so much to do.  And somehow blogging takes a back seat, even though I know that I need to do it right away or I lose some of the detail.  Thankfully I take pictures so I can remember what I was going to blog about!

Last week we were looking at the dimensions that will produce the rectangle with  maximum area given a fixed perimeter.  Everyone has probably taught this at some point and I don't think that I'm doing anything particularly exciting but I am trying to put more of the learning in the kids' hands and do less "telling".  So, this is how I started: 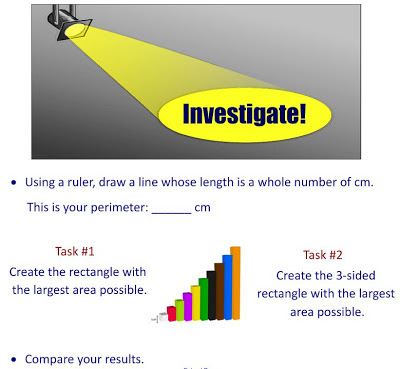 They each had their own perimeter but they worked together.  They had Cuisenaire rods to build the different sized rectangles.  (As an aside, I would really have liked them to have had something flexible (pipe cleaners? to be able to make the rectangles as some didn't understand what I was talking about.)

This is what they came up with: 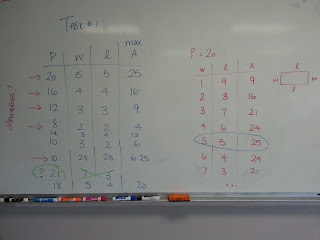 Task 2 took a little longer for them to figure out and again, so many even numbers! 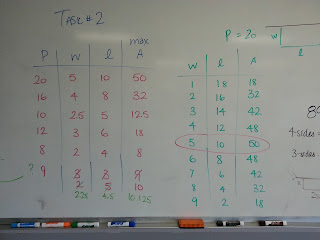 We went through what they came up with and then worked out the whole number possibilities for a perimeter of 20.

Then we generalized - they seemed to feel good about being able to answer the question for some ridiculously large perimeter.

I had my grade 9 class work on this problem today: 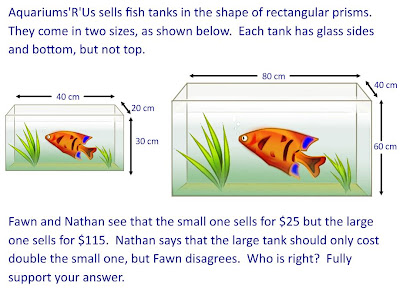 A colleague gave me a version of this that was fully scaffolded, but I thought it would be much richer if it was more open.  And I threw a couple of tweep's names in there for fun.

They worked in groups and wrote solutions on their whiteboards.  Here was the first attempt: 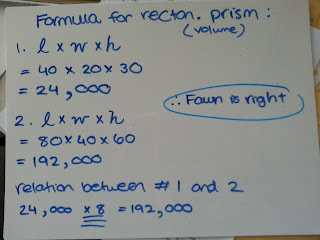 Although Fawn probably likes this, I asked if volume should determine the price.  A. said "Surface area!" and this is what he produced: 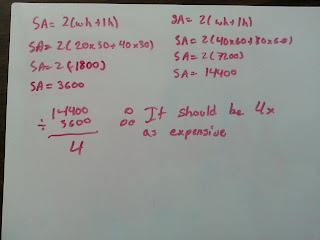 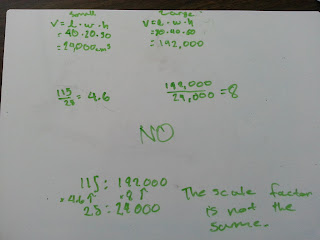 Along the way I heard a lot of "Fawn's right!" and some "Nathan's wrong!" (maybe I should have won your little exponent game, Nathan) 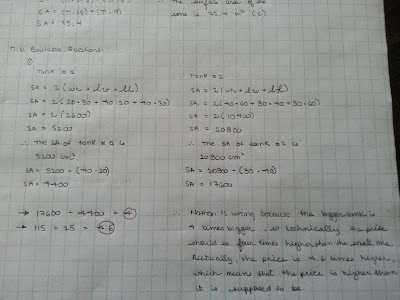 Today we started the unit on trigonometry.  We begin with similar triangles so I came up with this investigation - what makes two figures similar?  Students worked in groups of three, armed with rulers and protractor in order to measure the side lengths and angles of three sets of similar figures.  As a group they had to write down the properties of similar figures on their whiteboards.

They quickly determined that the angles all had to be equal, but didn't see the relationship between the sides.  I found that I had to ask a lot of questions to get them thinking about those side lengths.
me: "Which sides should you compare?"
student: "The two longest."
me: "Can you tell which sides to compare without knowing all the lengths?"
student: "No.  Yes...  Angles!"
me: "Okay, so now compare them." 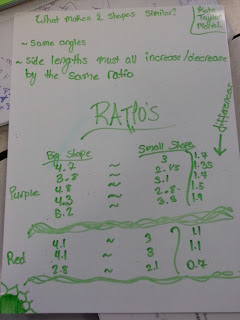 They could see that increasing/decreasing by a fixed amount was not the right strategy.  It was very interesting to see who came up with the idea of trying to find a number to multiply each of the smaller sides by to get the larger sides.  They erased and calculated the ratio of corresponding side lengths and voilà!  Scale factor! 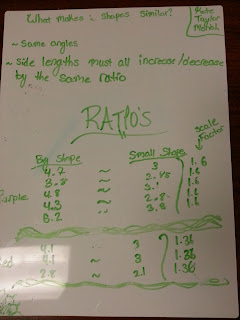 That was followed up with the second side of the sheet to solidify what they had figured out.

This activity was simple yet pushed some of them to think when they thought they already knew the answer.  They needed to be able to explain their reasoning to each other and to me.

Whether they remember any of it on Tuesday remains to be seen!

Fractions are not Frightening

At supper tonight, Isabelle told her little brother, Jacob, that he is 12 halves.  He had no idea what she was taking about.  She proceeded to explain to him that she could take 6 and write it in terms of halves by doubling 6 and getting 12.  He was not impressed.  But he's 6 and there was no Star Wars Lego involved so this is not surprising.

I couldn't let this opportunity pass so I asked Isabelle if she knew that she is 125 twelfths.  She looked at me with a confused-yet-I-accept-this-challenge look and started thinking it through.  Then she gave up and asked for the answer.  Fat chance!  I asked her how many months there are in a year.  Light bulb...she got the 120 twelfths and thought she had finished.  I asked her what month we are.  Another light bulb...only this was was not shining as brightly!  She came up with 120 twelfths and 1/5 (it has been 5 months since her birthday).  Nope.  And no to giving her the answer.  She wanted paper.  Nope (we were eating) - I told her she had all the pieces already.  And she thought about it a little more and got 10 and 5/12 which is 120/12 and 5/12 or 125/12.

Then we said that Noah is 101/12, but she was done (and apparently no one cared how old Chloë is, but she was refusing to eat her supper, so I guess that's fair.)  That's okay - fractions are such a mystery to so many kids, I am glad that mine think they are kind of fun.  Hmmm....this is probably exactly what my students think I do at home!
Posted by Mary Bourassa at 5/16/2013 07:22:00 pm No comments:

The Week All Squared Away

Friday. Last period of the day. My energetic and lovely grade 9s.  And the topic of the day is the Pythagorean theorem, which they have done in grades 7 and 8, so it's not always, uh, exciting, shall we say.  However, the majority of students only seem to remember "a squared plus b squared equals c squared" as if every right triangle would be labelled with a, b and c, the latter being the hypotenuse. (I have been know to quickly draw a triangle labelled with a, b and c where a is the hypotenuse - that confuses them.)  So today I decided to do part of an activity that I stole from Alex Overwijk (26 Squares), World Freehand Circle Drawing Champion.  (That is another story which you can also read on his blog... it all started when we taught together many years ago, but being somewhat shorter than Alex, I was not part of any of it!)

Back to today.  Students walked in to find these instructions:

Each group received a package with squares of side length 1 to 26.  With four students per group, it did not take long to cut them out.  I also provided them with an envelope in which to place the squares as they cut them out.  Still M. managed to lose to the 2 square.  Sigh...  Then they got to play but quickly converged on creating a triangle with the sides of the squares.  Perfect.  Next question:

I gave each group a whiteboard and let them argue about who was right.  "Of course you can make a triangle with any 3 squares!"  "No, you can't - try with 1, 2 and 26."  Z tries...  "Well, that's just a fluke."  FYI - by fluke he meant "I was wrong."  I prompted some groups to think about if they made the smaller squares progressively larger, at what point would it actually form a triangle.  This took the form of "What if that 3 was a 4?  Keep going with that."  They came up with the limiting case when the sum of the two smaller sides equaled the longer side and wrote it like this:

Off to work they went, trying out lots of possibilities.  My instructions we clearly not adequate for this part as they came up with combinations that looked like they could be right triangles, but in fact, were not.  We talked about this, and next time I would have them place the three triangles on the grid side of their whiteboards to ensure that they truly had a 90 degree angle.  If time allowed I would also get them to go back and check their work after we established what makes this "work".

We consolidated by listing combinations that worked and they noticed a pattern between:

so we came up with more!  I also eventually showed them a list of Pythagorean triples on-line.  One of them said "But there would be an infinite number of them, right?".  : )

The time flew by - gotta love a Friday afternoon when they aren't all looking at the clock!