I can't say how many times I have changed my mind on how to teach trig in this first cycle. At some point I had thought I would start with word problems to give students the context around what we are doing. I have started with slope angle which turns into the tangent ratio before, but didn't do that. I still need to take some time to reflect on whether I chose the best path and to make notes of what might work better next time.

For our third day of trig, we worked through word problems. We started by talking about the angle of elevation and the angle of depression (I have no idea where this handout came from so I cannot give credit. If you know, please let me know.)

At this point I realized that my entire class seemed to still be in a post-turkey haze so I made up an example on the whiteboard and got them going. We talked about how you could find an angle inside the triangle given the angle of depression and came up with a couple of options. 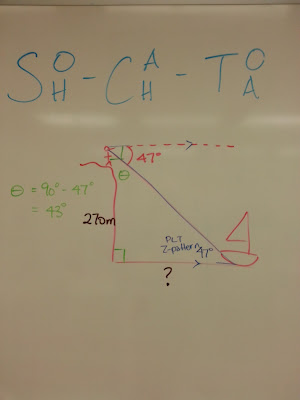 I had them all solve using whichever angle they preferred. This turned out to be a really good thing. I wrote both solutions on the board and many decided that the one on the left was easier as the variable was in the numerator on that first line. This led to a good discussion about whether they could always make that happen. Others didn't care that the variable was in the denominator which also made me happy. 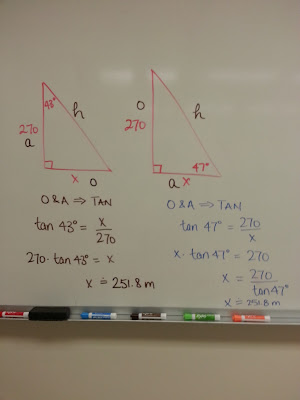 We then did the actual examples I had planned, which turned out to be a little repetitive as many use the tangent ratio.

I purposely removed the diagrams for as many questions as I could as drawing them and correctly labelling them is a big hurdle for some students. They worked through this one and then we consolidated together. 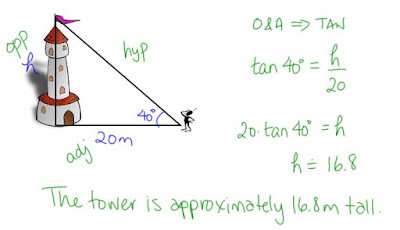 Here is the next one, again they had to draw the diagram: 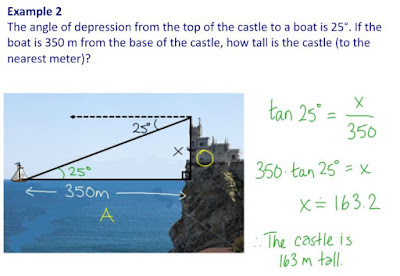 Then they worked through three practice problems. Along the way we defined "stringer", "guy wire" and "clinometer". I randomly chose names of students to put up solutions to the practice problems and we looked over them together. 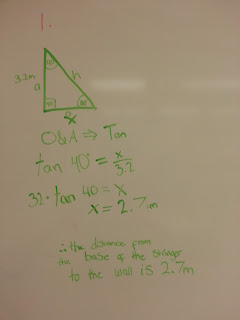 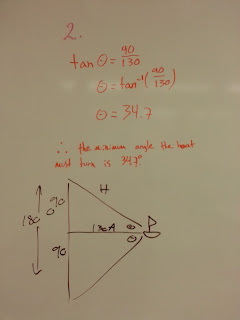 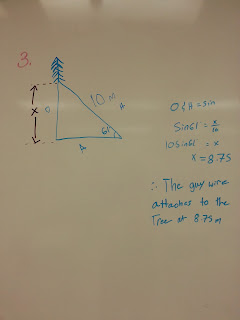 We had time to look at one more example together.

At this point, their eyes glaze over because they were overwhelmed by the sheer length of the question. I asked them to read it as many times as they needed to in order to draw a diagram. They tentatively did so. I showed them that they could break it up into two triangles, each of which they could solve. They seemed to understand that they needed to take the sum of the answers to get the height of the taller building. 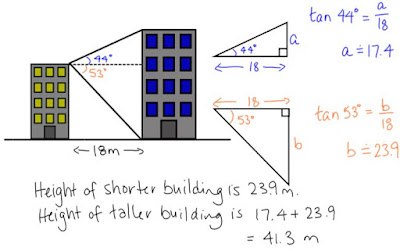