As I work through this way of teaching MFM2P I realize that some of my anxiety stems from my need for structure.  I like to know exactly what we will do in each class, each day.  Note that I am okay with controlled chaos too - teaching shouldn't be all neat and tidy.  Anyway, I have figured out that if I record what we are doing in class either by taking pictures of the whiteboard or by working on the SMARTboard, it helps me with that whole need-for-structure thing. And this blog is in large part for me to refer to when I teach this course again.  Frankly, I can't believe that anyone is reading it (really - why are you?!?)

Day 8:
We looked for patterns (see day 7) and someone noticed that the area of the big square was equal to the sum of the areas of the two smaller squares.  We drew the squares on the triangles to demonstrate this. 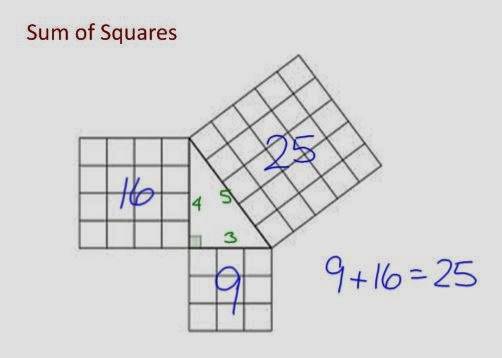 Somewhere along the way we had to go over the fact that, in a right triangle, the...

And we worked through more examples in the same way - notice there is no a, b, or c here.  No x either.  We figured out the remainder of the table this way, which took a bit of time as some had a hard time figuring out when to add and when to subtract. 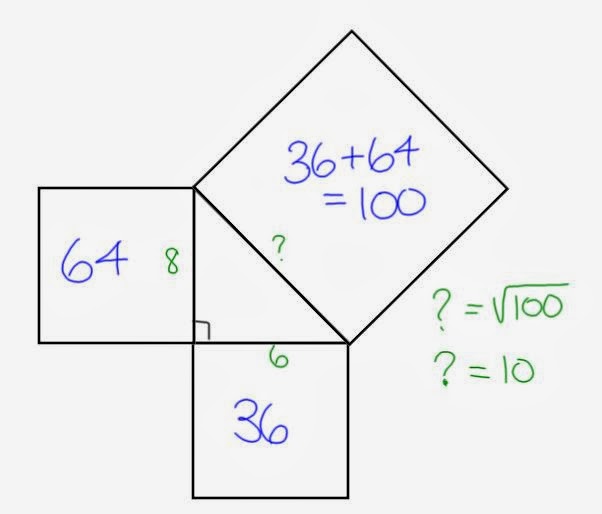 I then asked them to see if they could find a pattern among some of the 9 triangles. They needed more to work with so I gave them this: 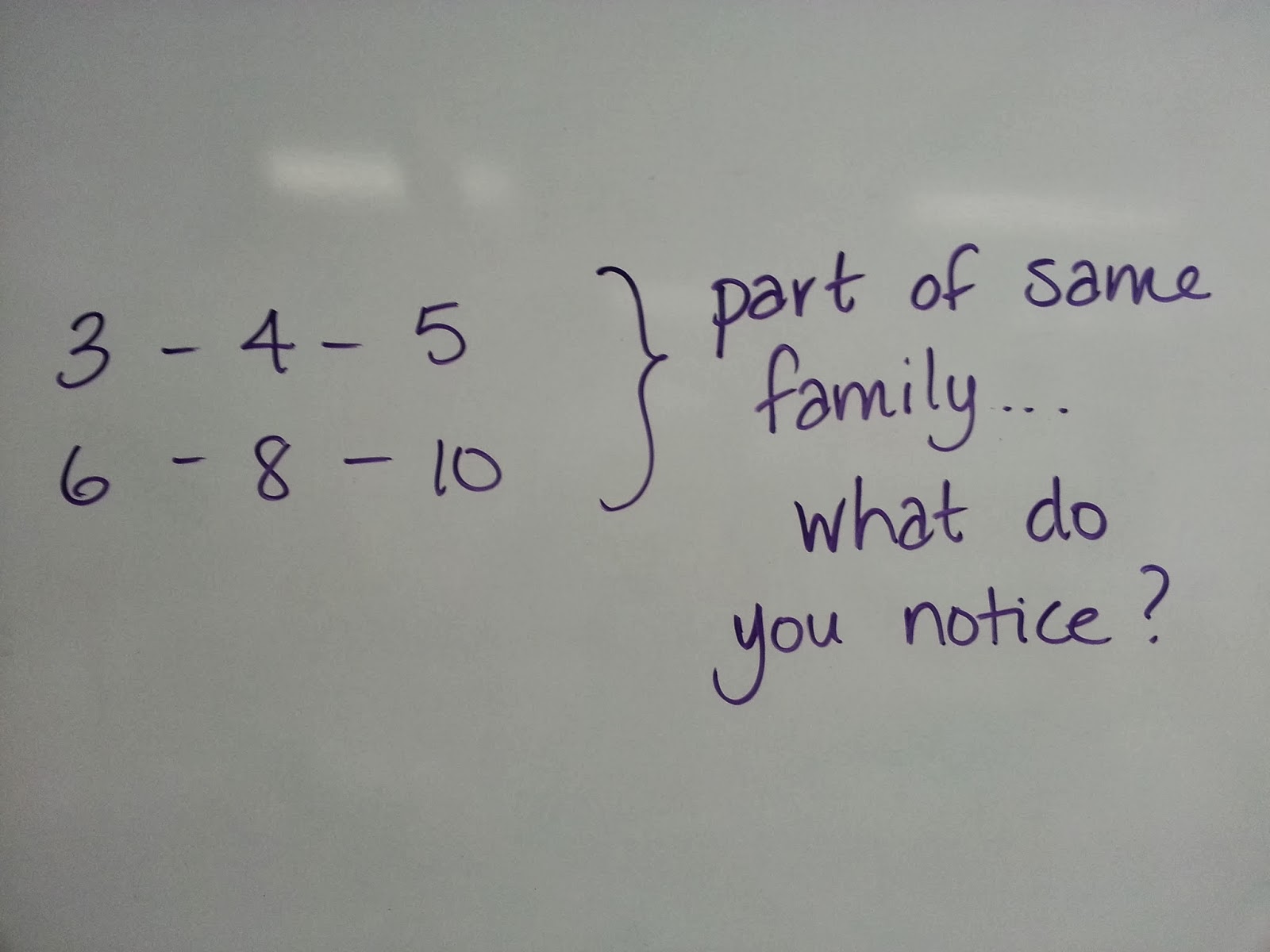 It was interesting to see that some noticed that the first number went up by 3, the second by 4 and the third by 5, where I notice that the second row is a multiple of the first. They came up with the other three triangles in the same family and separated the remaining three triangles into 3 more families. (We also showed that we could keep generating triangles within a family.) 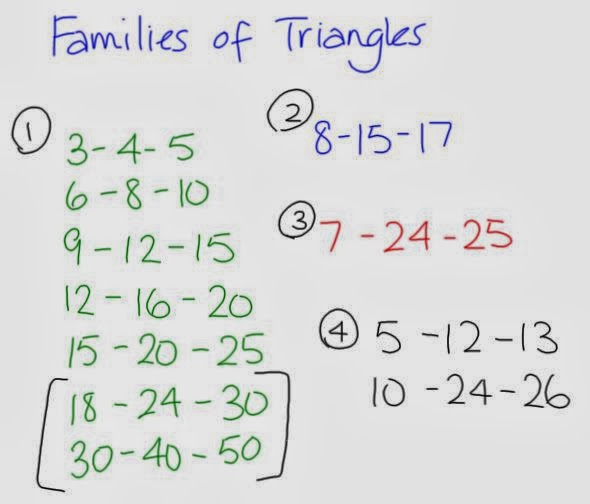 Day 9:
Students started day 9 by drawing the 9 triangles in their comp books, with correct side lengths. They then measured the acute angles - some needed to be shown how to use a protractor correctly - and recorded them on their diagrams.  They also had to calculate the area of each triangle. 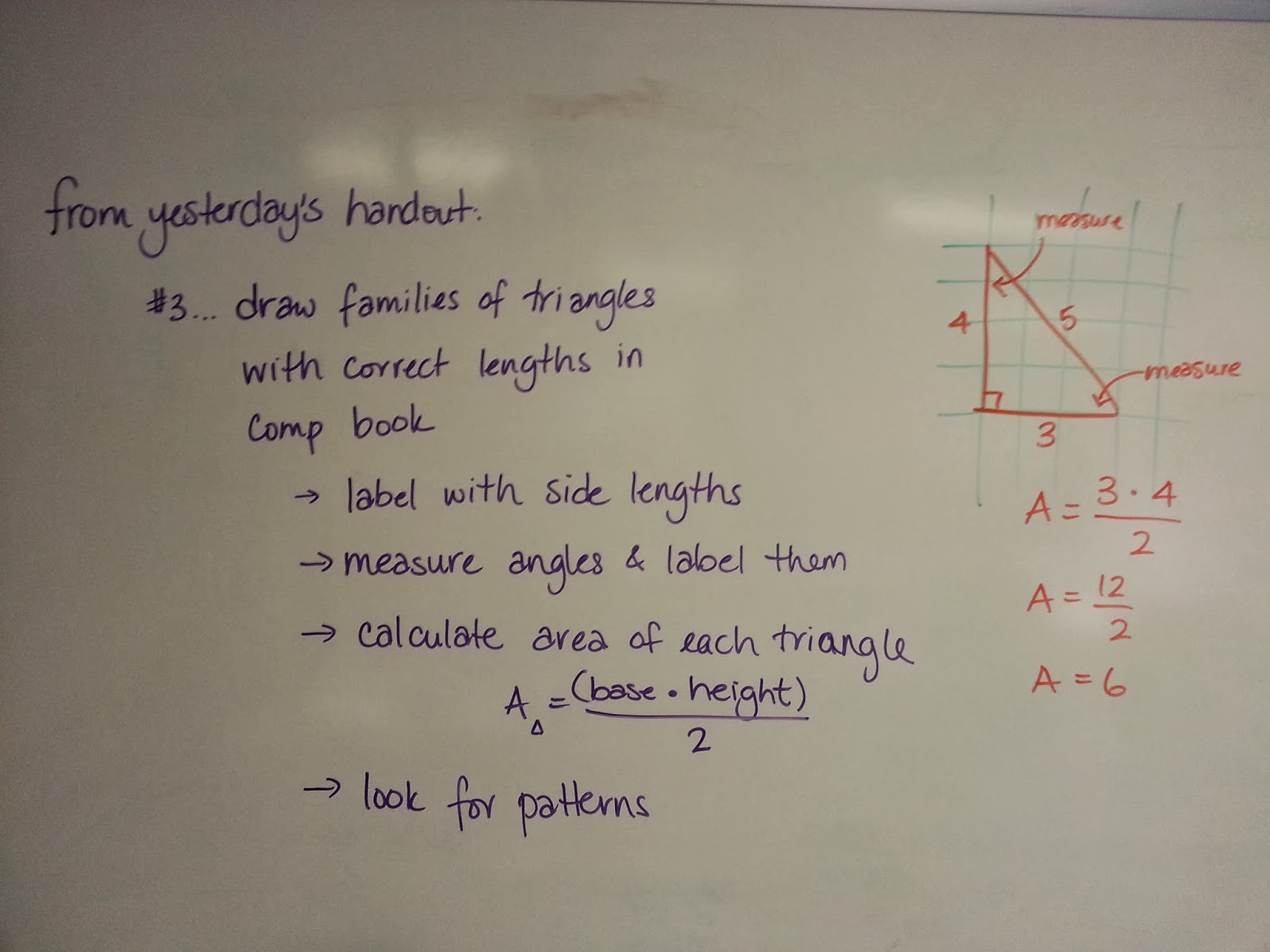 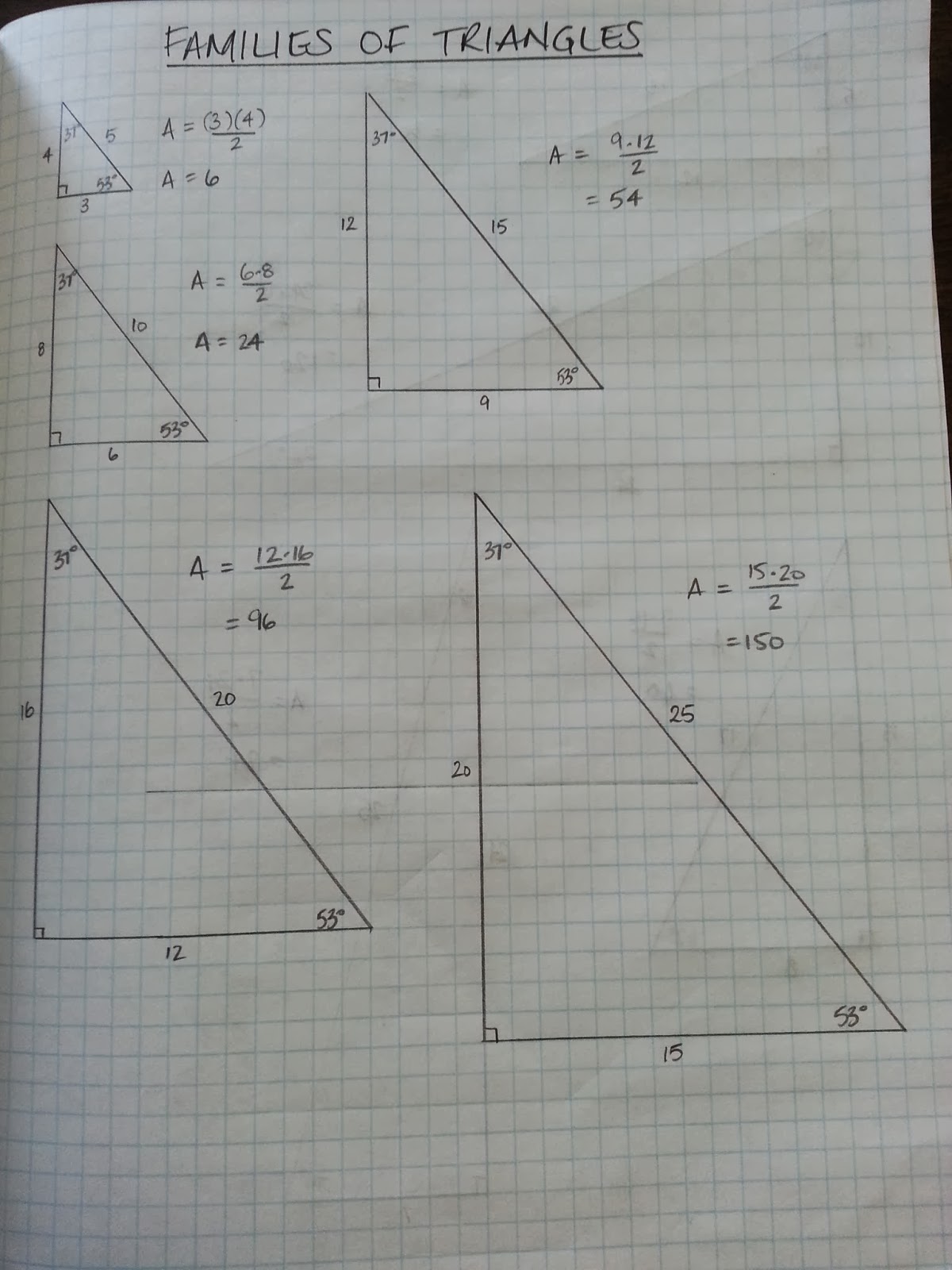 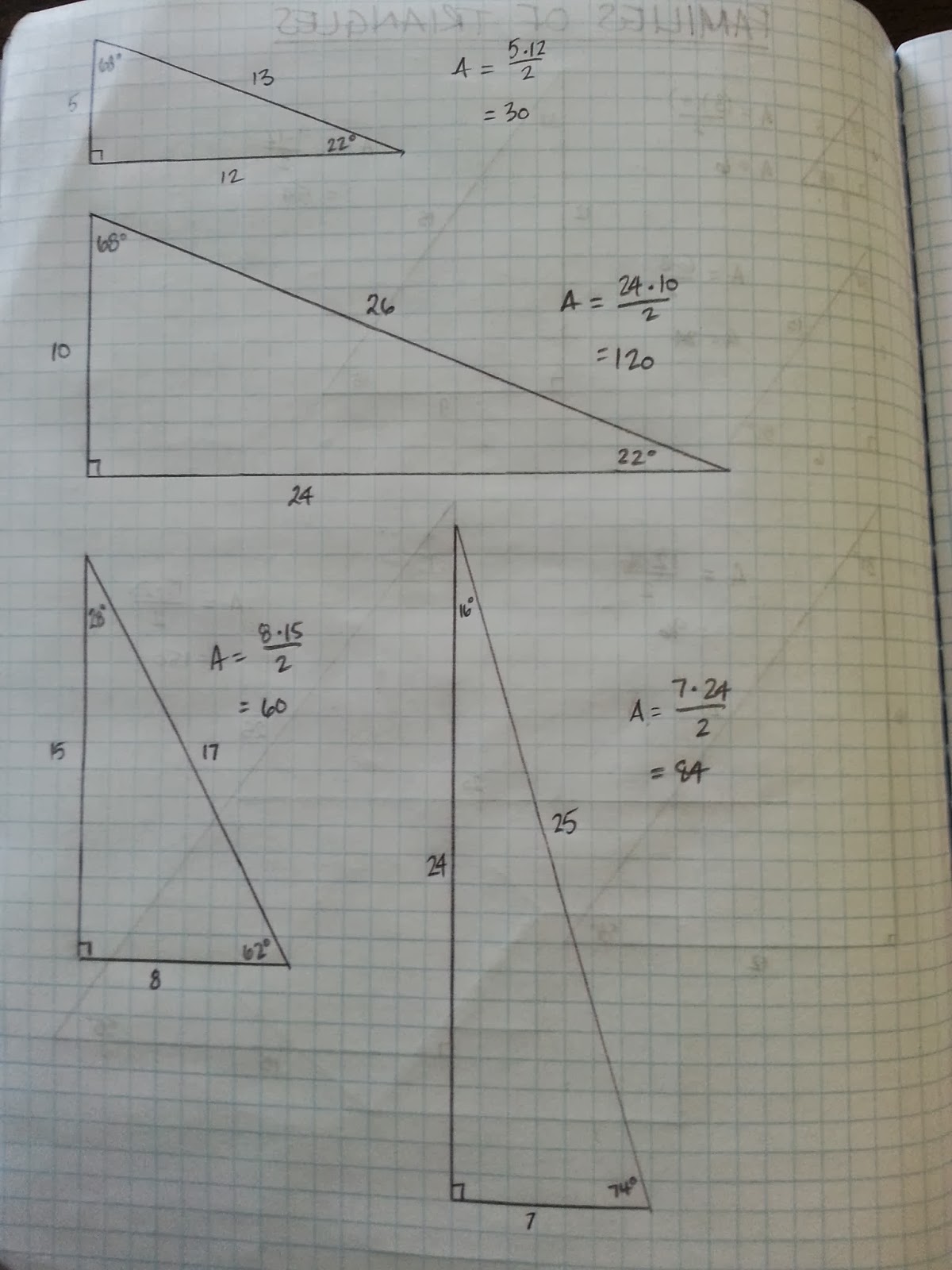 Note: I will get them to plot the areas of the triangles within a family based on scale factor and come up with the relationship. Not sure when we will do that, but it's part of the plan!

They quickly noticed that the angles within each family of triangles were approximately the same. 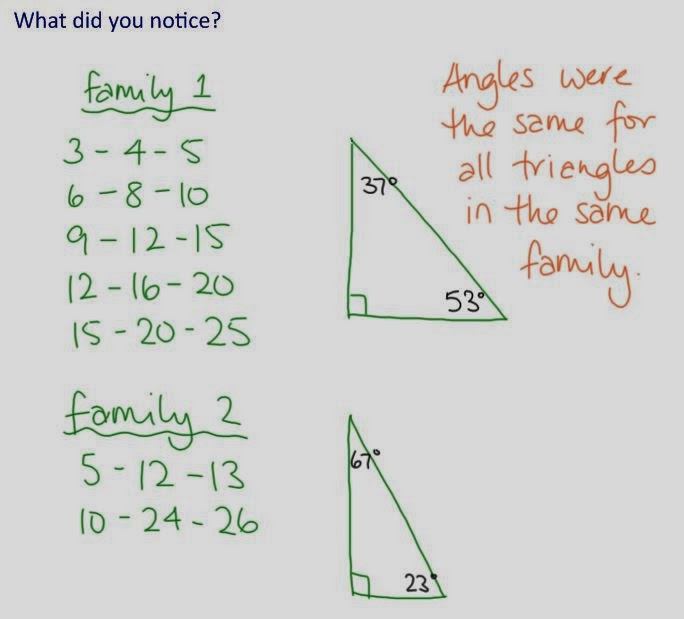 We talked about the properties of similar triangles.  This was not very exciting for them or for me.  Less so for them, I think.  (if you know of a way of making it more interesting, please let me know) 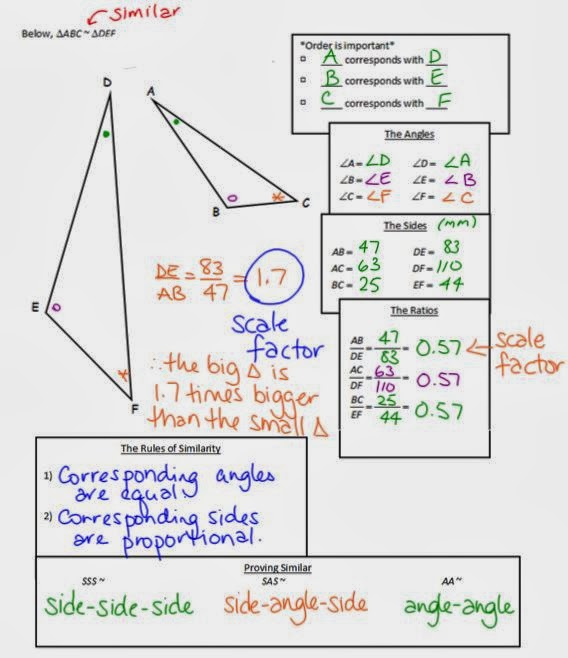 Somewhere along the way I realized (duh!) that we should have MEASURED the angles, not just stated that they were equal (I am dumb sometimes) but I think we still got what we needed done.  And they had had enough after this!

Day 10:
Having received an email from my principal reminding us that progress reports are just around the corner (really? we have only had 2 weeks of classes!) I decided I better gather some "evidence" of what my students have learned so far. I spent part of my prep period this morning before class making a quiz to cover the types of the linear and quadratic scenarios we had looked at. I made sure they knew that they were allowed their comp books and any handouts for the quiz.  There was surprisingly little complaining and they got to work. They did a good job showing me a lot of what they know, with a little help from me along with way. There were a number of "I know this is wrong, but..." questions which I responded to by telling them to write down what they had just said to me - tell me that you know it's wrong then see if you can fix it. A couple of students needed encouragement to get going or keep going, but overall the results are fairly impressive - they worked for a solid 40 minutes!

I let them take a break for a few minutes after the quiz the we continued with similar triangles. We recapped yesterday's conclusions and started with the examples.

I suggested that adding symbols to the diagrams to help identify corresponding angles would be a good thing. 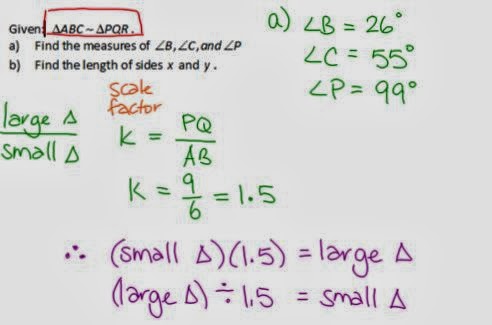 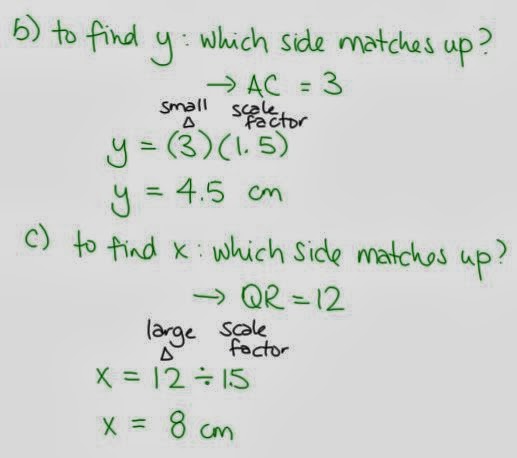 Happily most students remembered the sum of the angles in a triangle so they had no trouble with the next example.  They did need some help figuring out how to tell if triangles are similar if they are only given the side lengths. We will work on that some more next class. 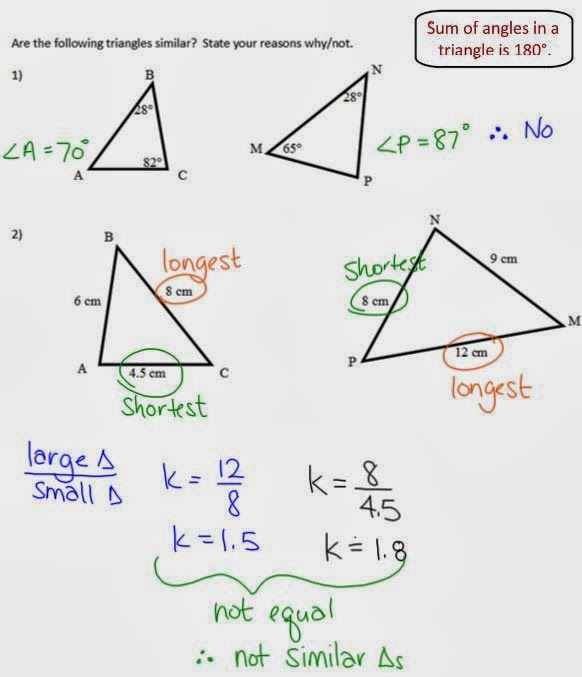 So there is the end of last week.  Yesterday (Monday) was Family Day here so today is day 11 and I will try not to leave my blogging for so long this week, 'cause that makes it so long!