Today students completed tables of values for the perimeter and area of a square, looking for patterns (constant first differences) and patterns within patterns (constant second differences).  They did this well, although many had the wrong perimeter for a square of side length 1, which I found interesting (and puzzling).  Having them draw a square and label the side length of 1 on each side quickly cleared that up.  It was also interesting to see that they could find any mistakes in perimeter or area by seeing that the pattern no longer held.  Next, they created scatter plots of their data by hand.  They were really good at this!  Some needed some help figuring out their scale, but overall, they did an amazing job. 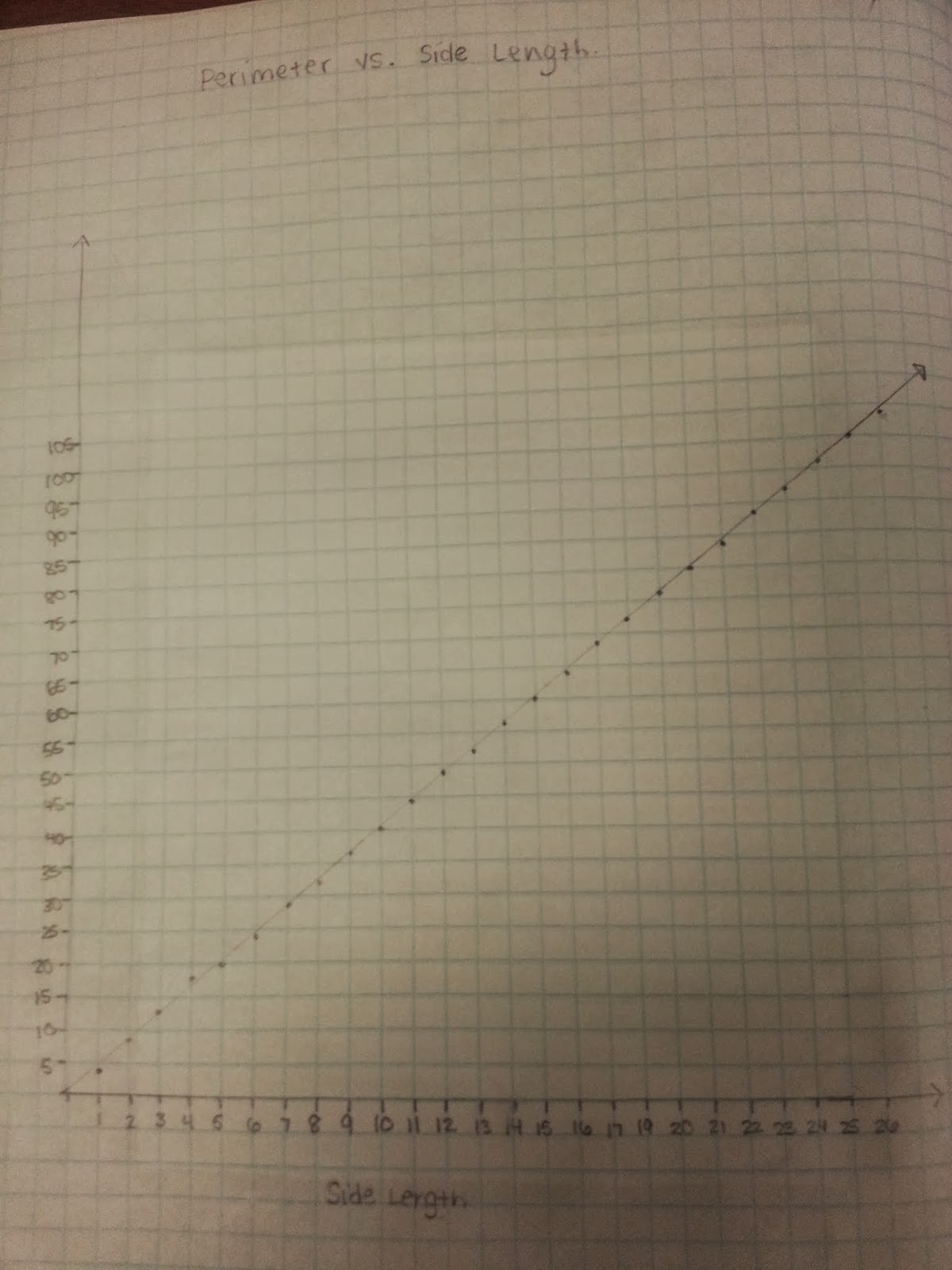 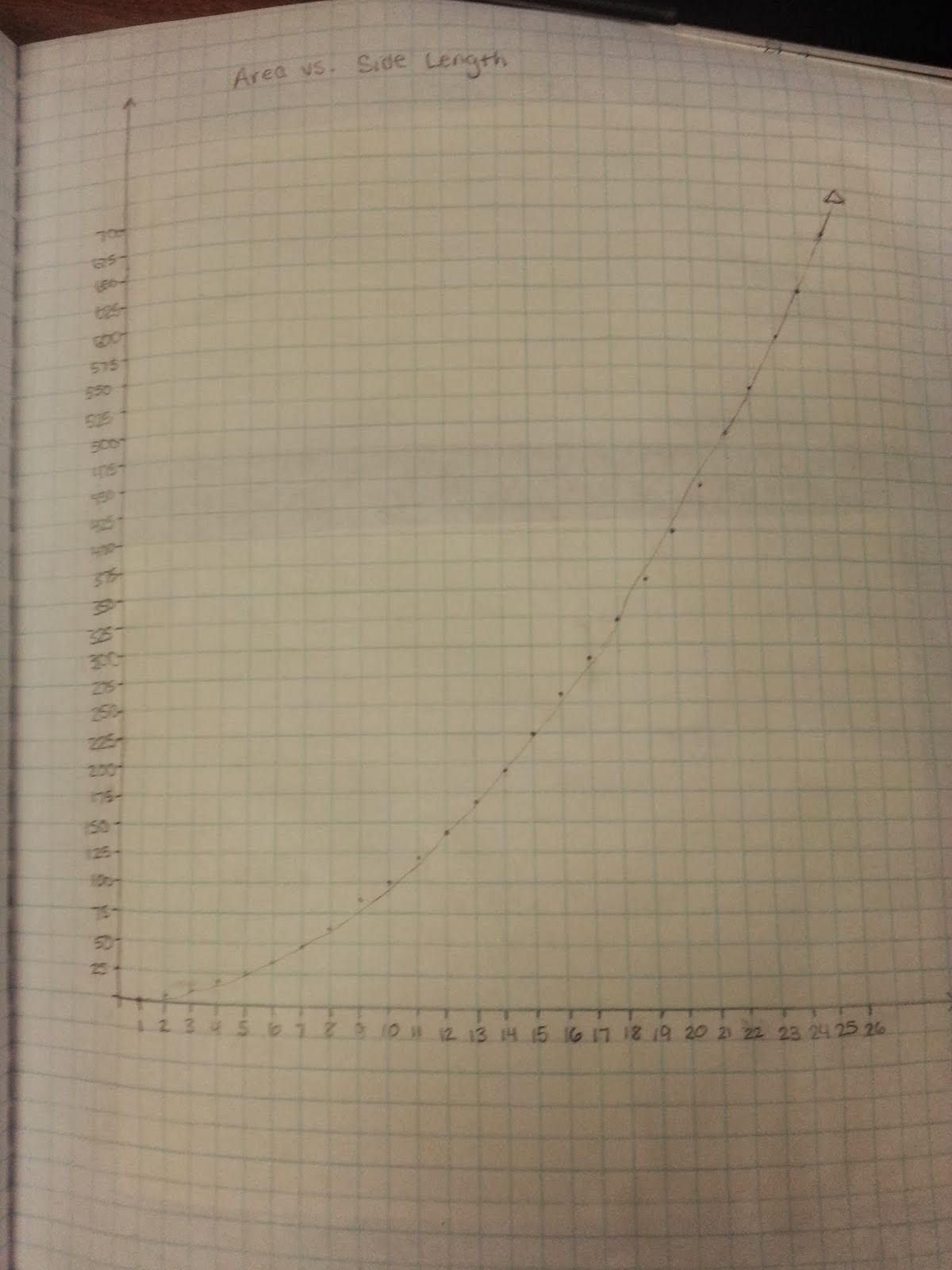 They needed to find a formula relating side length and perimeter and another for side length and area.  This was followed with a number of exercises for them to work through.  Some students finished it all - one did so very quickly and I gave him some visual patterns to work on.  Others started the class by finishing getting their squares ready as they had not completed this yesterday.  I also got two new students so they had to start from scratch, but got some help cutting the squares from me.  They were all caught up by the end of the class.  Anyone who didn't finish today's work in class should be doing it as homework.  We'll see how that worked out tomorrow.

Day 3:
We started today by "formally" taking up some of yesterday's work (note to self: need to go over 2nd page tomorrow).  Here is what the board looked like once we had talked about perimeter and area: 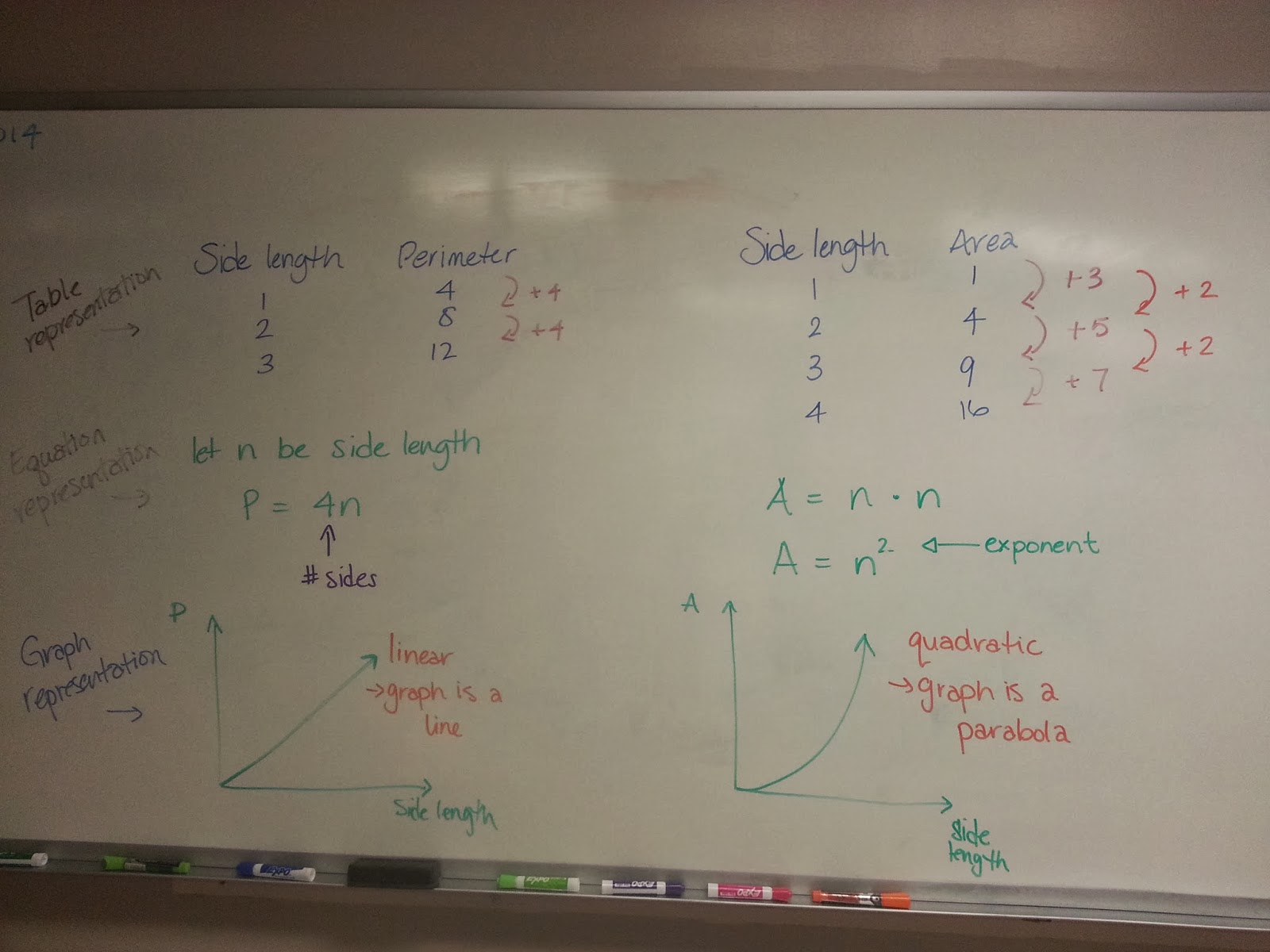 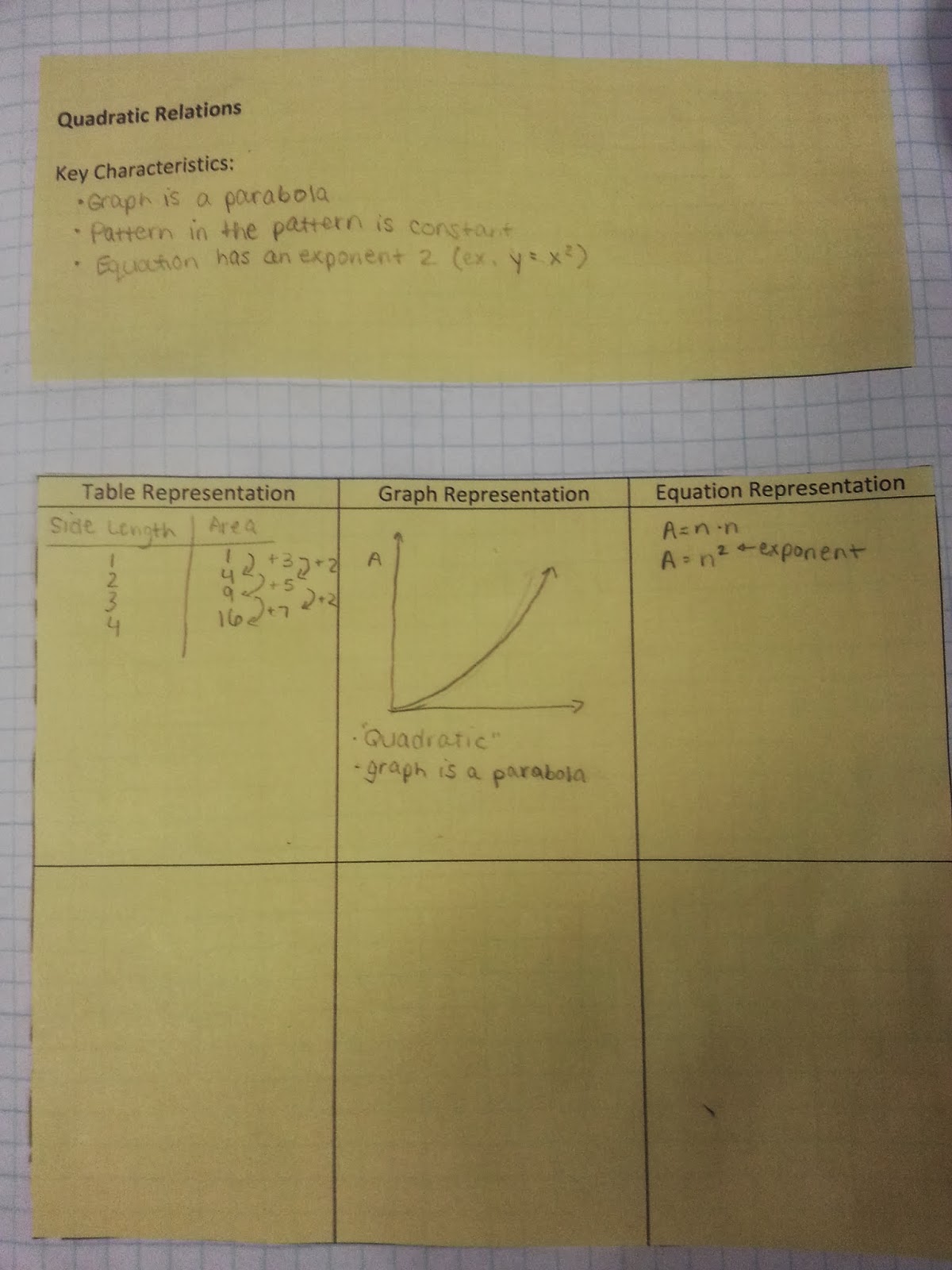 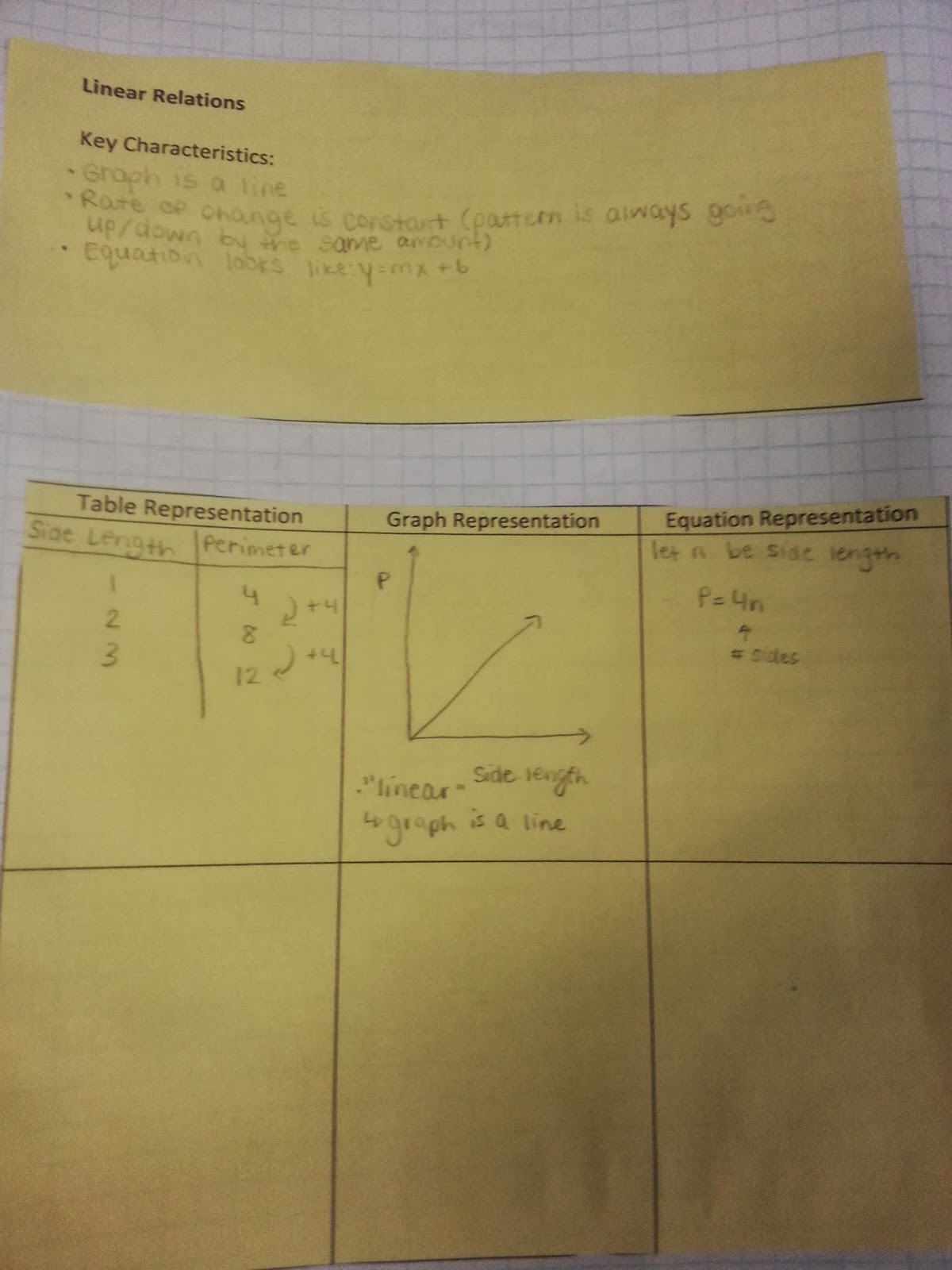 Next we put the data for side length and perimeter in the graphing calculators, created a scatter plot of the data and performed a linear regression. 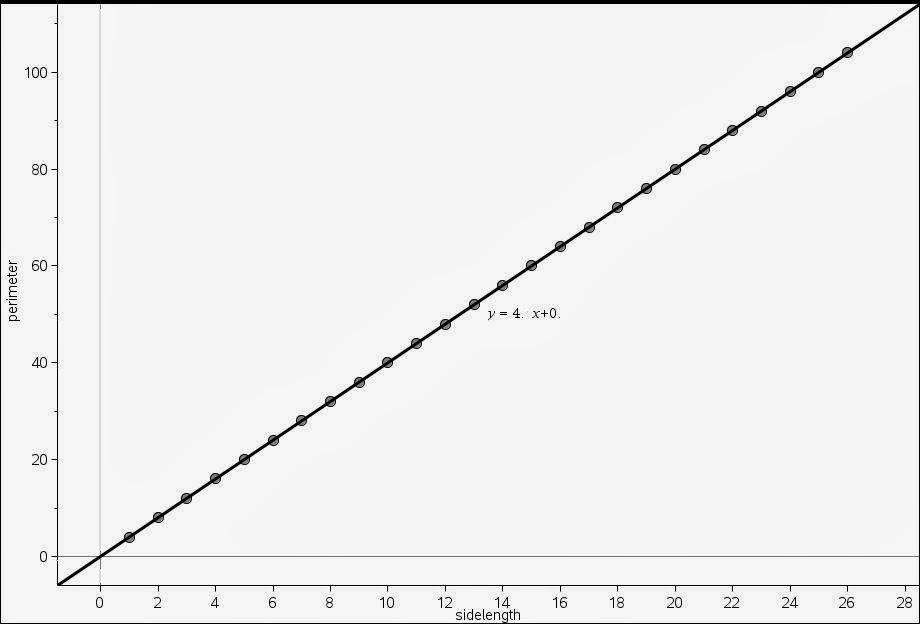 And that was 75 minutes!  I think that taking the breaks when they cut and glue are important as it gives students who are behind time to catch up or time to get more individual help from me.
Posted by Mary Bourassa at 2/05/2014 09:56:00 am